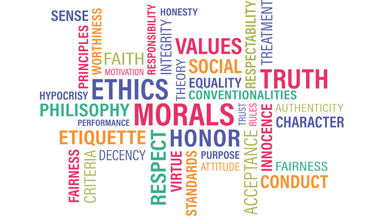 Ethics and morality in business

You probably have read much over the years about the basics of ethics, leadership, stewardship, morality and social responsibility within the business. You have most likely formed a good understanding of them based on your own personal experiences and thoughts.

However, most people do not really take the time to understand the true meaning of values, ethics and morality.

Values are the core beliefs or desires that guide or motivate our attitude and actions. What we value drives our behaviour. Different people value honesty or truthfulness in all situations; others value loyalty to a higher degree in certain situations.

Ethics determine right from wrong, good from bad, moral from immoral and just from unjust actions.

Overall, ethics establishes the rules and standards that govern the moral behaviour of individuals personal and business attitude it also distinguishes between right and wrong conducts. It involves honest consideration in establishing values, rules and the application of moral standards in the business environment.

Morals are judgments, standards and rules of good conduct in the society. They guide people toward permissible behaviour with regard to basic values.

Consider the following dilemma and how the terms values, ethics and morals apply.

In January a thief named Zar guarantees that you will receive agreed confidential information about your competitor Zar is professing a value - he will deal with you honestly because you are a  facilitator, and are very important to his future. When Zar has delivered the information as agreed, you could say that Zar has behaved ethically because he was consistent with his professed values.

The following month, you ask Dar, who is a competitor to Zar, to do the same thing. He makes the same promise as Zar by professing the same values. Five days later, Dar only delivers part of the information, which is not totally accurate, and at the same time, blackmails you for more money. Dar says that if does not get more money, he will go to the competitor and report business dealing.

You could say that Dar has behaved unethically because his actions were not consistent with his professed values. And, you can conclude that all three parties involved in stealing insider information have acted immorally as judged by the majority of the population.

Overall, values are statements of your own beliefs, ethics is delivering on one’s professed values and morals are actions of good conduct as judged by society.

Business codes of ethics are not merely manuals for how to solve problems; they are tools that can empower everyone within the business to say,

“I am sorry, that is against our policy or that would violate our company’s code of ethics.”